www.cyberscan.io uses cookies
We use cookies to give you the best possible use of our website. You can find out more in our data privacy policy or imprint. By clicking on "Allow all", you consent to the use of these technologies. You can revoke your consent here at any time with effect for the future.

Statistics cookies help website owners understand how visitors interact with websites by collecting and reporting information anonymously.
Marketing cookies are used to track visitors across websites. The intention is to display ads that are relevant and engaging for the individual user and thereby more valuable for publishers and third party advertisers.

The next generation IT security tool

cyberscan.io finds the paths hackers would use to penetrate into your system

Increasing number of vulnerabilities of today's IT systems

Today, IT and software systems of an organization or company normally consist of a variety of hard- and software and services are often provided by a mixture of own and external hosts. Within these heterogeneous and complex structures it is challenging for system administrators and maintainers to keep track of the currentness of all systems. If, for any reason, this attempt fails it will lead to an increase of vulnerabilities in the systems in use, growing the potential risk to be targeted by hackers and intruders.

To protect systems against hackers and intrusion attempts at any time, it is mandatory for system administrators to obtain an overview of the current system status and potential vulnerabilities. In the best case this task should be performed automatically by an easy-to-use and scalable analyzing software which makes available a comprehensive and clearly structured overview. In addition, it ideally suggests appropriate measures to eliminate shortcomings and vulnerabilities.

At this point cyberscan.io gets involved. cyberscan.io is a vulnerability scanner, penetration testing tool and OSINT scanner in one product. cyberscan.io identifies all IP addresses and subdomains related to a domain and scans them for open ports. Port scanning results are matched against various sources for threat analysis and detection, including but not restricted to vulnerability bulletins of all important software vendors.

Overview of all external and internal vulnerabilities

Updates not installed, wrong system configurations and inadequately assigned user rights - in one word: misconfigurations - still are the main triggers to facilitate intrusion into IT systems. cyberscan.io therefore assists administrators and maintainers by providing:

Minimizing the risk of human deficiencies

Often individuals utilize the same email/password combination in different contextes, for example in their company and on a dating platform. This in mind, cyberscan.io does not only screen your system, it also searches both deepweb and darknet for publications of login data like for example user names and email addresses including related passwords and password hints which might exist. cyberscan.io reports matches of those findings with the email addresses of a domain, putting administrators and maintainers in the position to take measures against the misuse of those combinations.

Once cyberscan.io has completed a security scan, the results are supplied in multiple formats. All detected vulnerabilities (including risk classification according to CVSS) can be 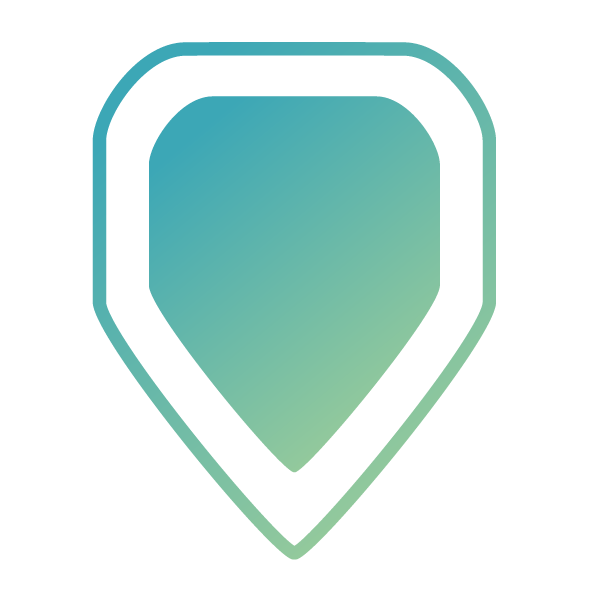 A scan gives you an overview of all vulnerabilities

cyberscan.io matches your external IP addresses with various sources for threat intelligence. For this we access DNS servers, evaluate IP addresses as well as subdomains and check the determined systems for open ports. For the query of IP addresses cyberscan.io disposes of an extensive data base. This data base contains information to all assigned IP addresses worldwide (approx. 3.6 billions) and is being updated continuously. Our IT security check is a vulnerability scanner, penetration testing tool and OSINT scanner in one product. 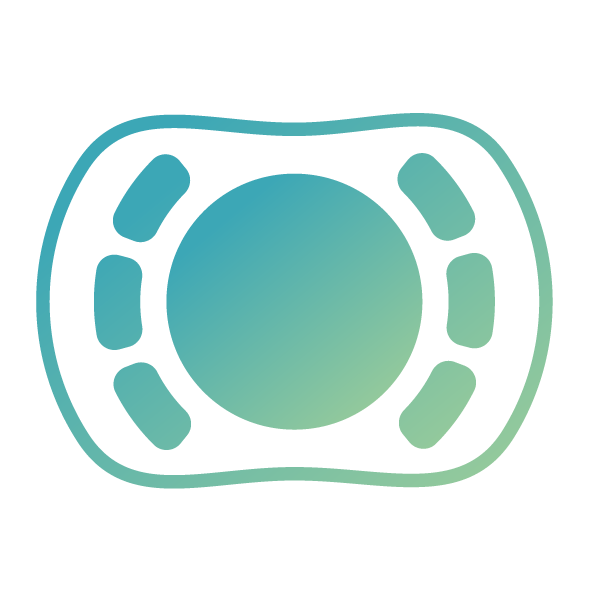 cyberscan.io doesn’t only screen the internet, but also the deepweb and the darknet for publications of login data like for example user names and email addresses including their related passwords. Those will be captured in our data base and matched with the email addresses of the domain, because often this combination of email address and password is not changed, but also used outside the company‘s network, for example on a dating platform. Therefore the likelihood of someone’s penetration into a company’s network is very high with such a combination. 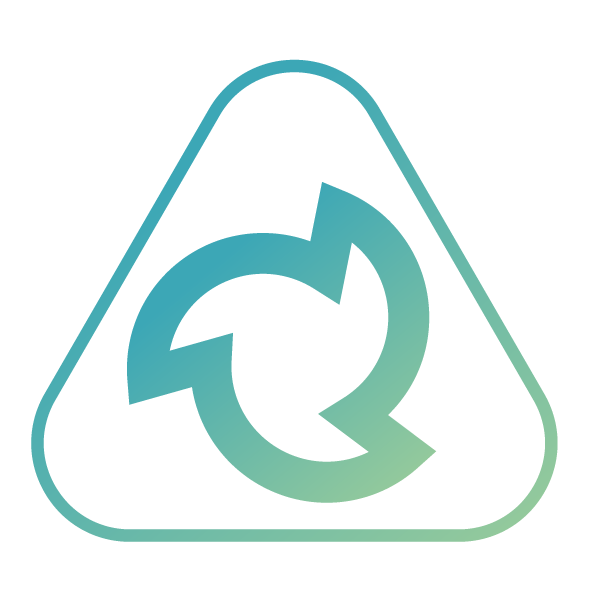 Our scan offers protection, monitoring and recommendations for action. After the security scan cyberscan.io generates a report, which contains the following data:

Furthermore cyberscan.io offers a priorisation of the recommendations of action as well as repeated security analyses to ensure the highest success in the shortest time frame possible.

The next generation IT security tool

To close security leaks, a company needs a tool, which checks its security status continously and maintains it. Our cyberscan shows the vulnerabilities in your company´s, your clients´ or your providers´ IT infrastructure.

cyberscan.io finds the paths, which hackers would use to penetrate into your system!

Insufficient updates, incorrect configuration and incorrect assignment of rights are still the classics to allow a penetration into external systems. Whereas those vulnerabilities are quite easy to fix, the so-called exploits (software, which takes advantage of vulnerabilities) are much more complicated to handle. The reason: They only become to be known gradually and not every computer has to be affected. This results in an considerable amount of time and costs to protect onself permanently. This includes:

This is where cyberscan.io starts out. Our tool takes over and checks your security status continuously for

This means that cyberscan.io is, among others things, evaluating more than 150 000 linked exploits, 500 millions of password leaks and is monitoring more than 100 weblogs. Furthermore our verification system will be updated continously and promptly after an official announcement of a new vulnerability.

Check the IT security of any domain now ...


... or register immediately to get a free 14 days trial!

Increasing number of vulnerabilities of today's IT systems 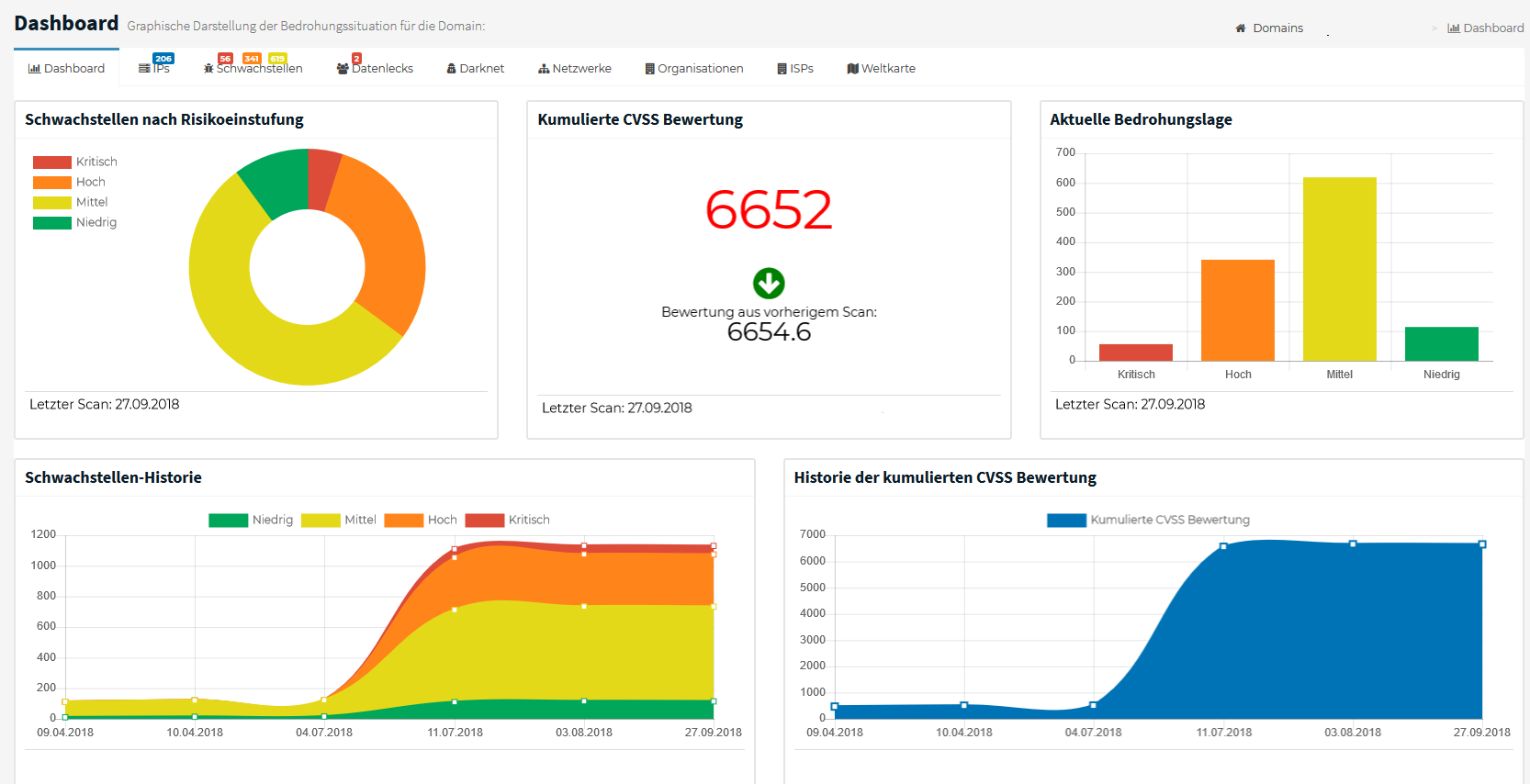 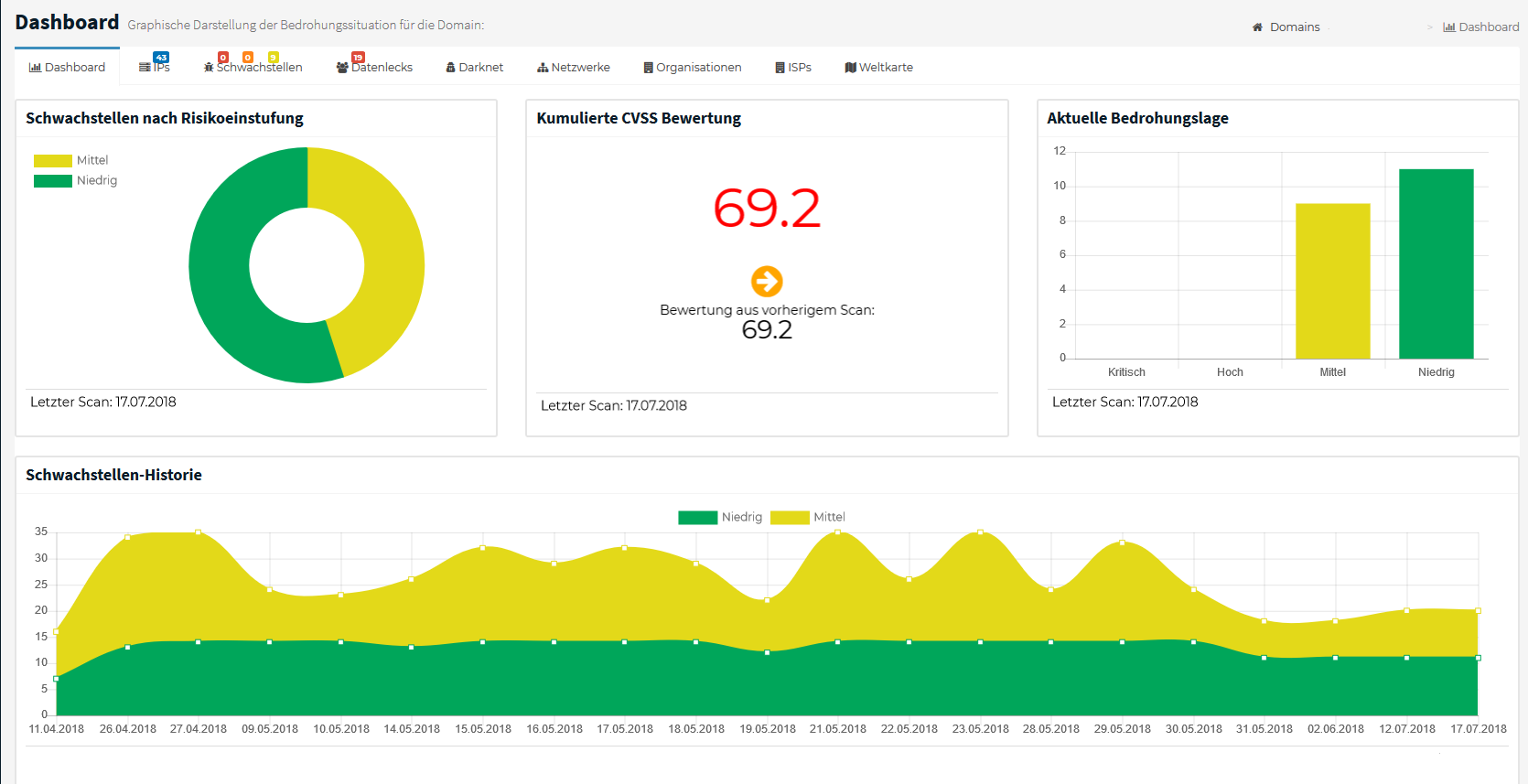 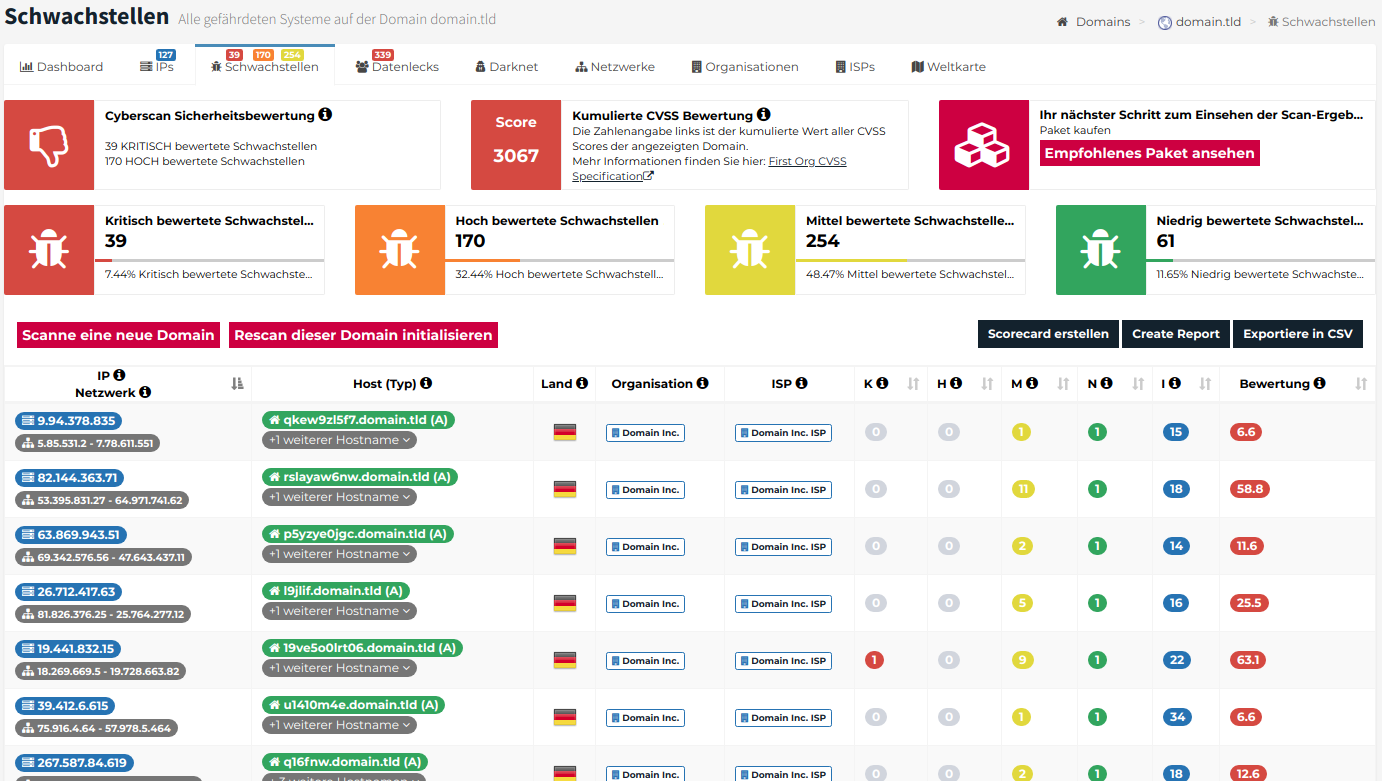 Overview of all external and internal vulnerabilities 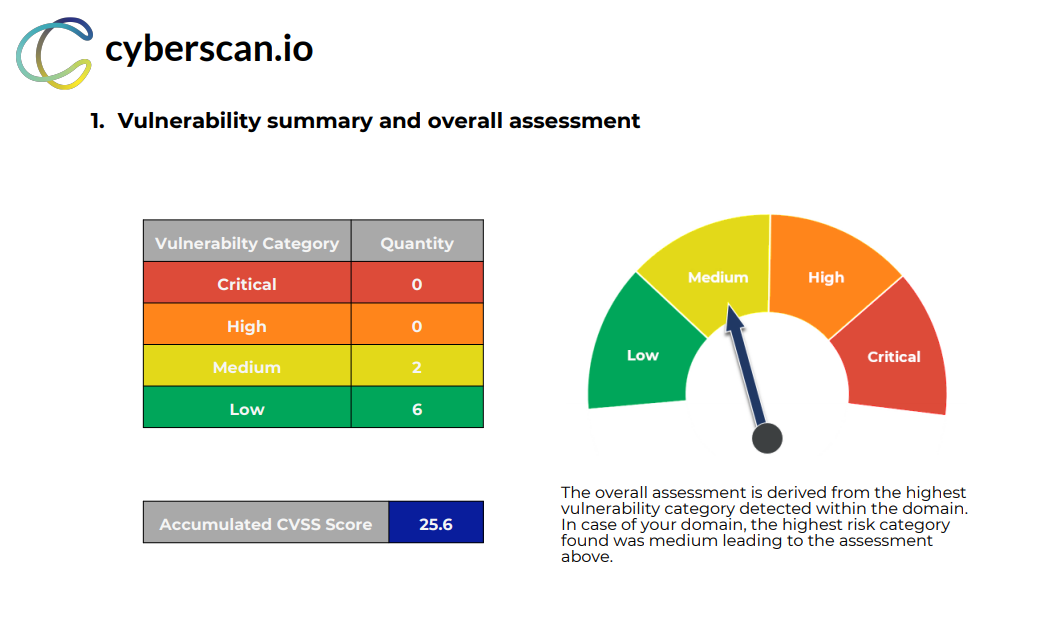 Minimizing the risk of human deficiencies 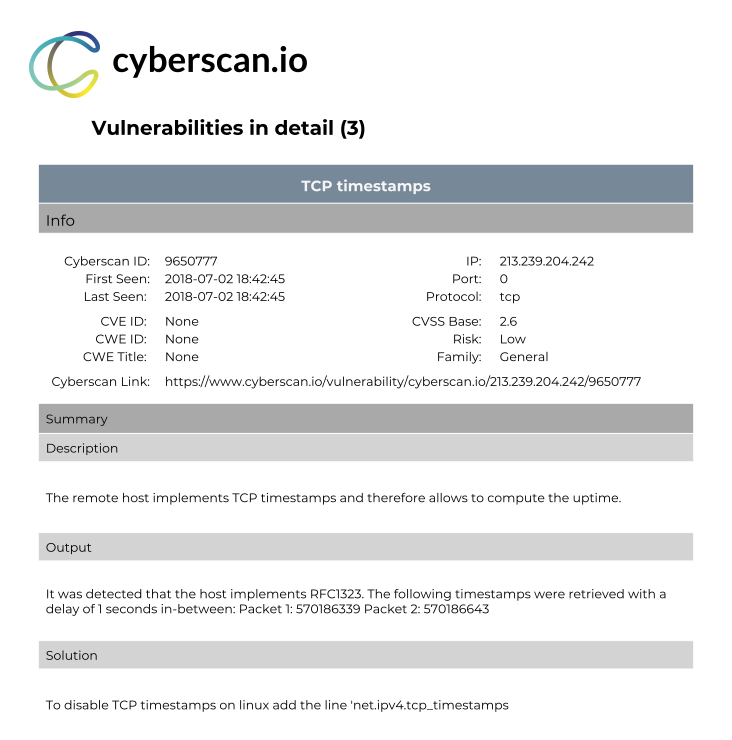